Why is called Costa Blanca? 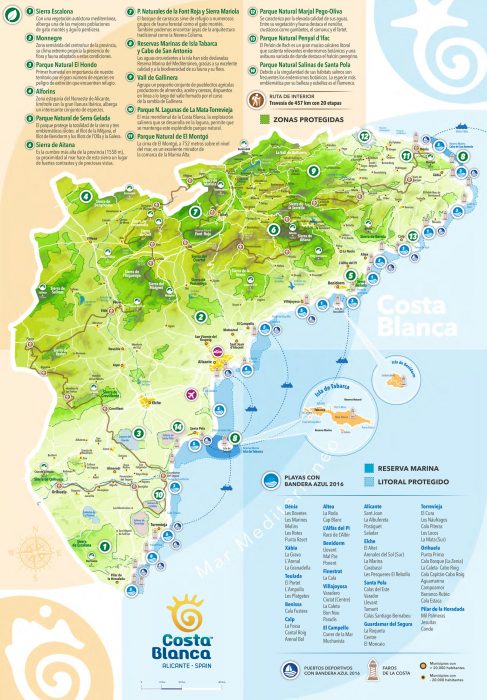 The origin of this calling is uncertain, but we compile the three most supported reasons.

1. – The origin of the name may be due to the contrast, seen between the blue sky and the white sand beaches; and the white villages washed with the blue of the Mediterranean Sea.
2. – Another theory says that it was invented in 1957 by the British Airways company as a tourist slogan to promote an air connection between London and Valencia.
3. – The Costa Blanca is so called, also, because in the past you could see many white almond blossoms along most of the coast. It also has a recognized prestige for having the healthiest climate in Europe with plenty of sun, mild temperatures and low humidity.

The Costa Blanca, located in the south-east of Spain, is made up of two clearly different spectacular sectors. In the north, a mountain range extends parallel to the sea, sometimes descending into the sea to form cliffs; In the south, an immense plain of sand, palm trees and saltwater lakes forms a beautiful landscape for the beaches.
It also has a recognized prestige for having the healthiest climate in Europe with plenty of sun, mild temperatures and low humidity.

If you like to travel, you can choose any of the corners of this coast, from the most tourist and cosmopolitan to those that still maintain their rural appearance by the sea. In any case, it is worth visiting the neighboring regions, as they are a good representation of the Mediterranean landscape.
From the valleys, which are covered with fruit trees and where you can appreciate their Arab past, to the palm trees with their unmistakable African origin, the horizons of the Costa Blanca offer very varied attractions.

Changes in climate also happen, temperatures in winter reach an average of approximately 17 ° C, and in summer reach an average of approximately 35 ° C. It rains little, although logically there is more humidity in the mountainous sector of the north, in comparison with the low lands that surround Elche and Orihuela. The almond groves, the vineyards, the orchards of fruit trees and the splendid palm trees form a vegetation that complements the oriental nature of the landscape.

The Costa Blanca offers one of the best and most varied tourist services in Europe thanks to the quality of its services, its excellent climate and its cultural richness. The beaches and mountains of the province are a delight for everyone who visits them. The numerous areas of the Costa Blanca for leisure and entertainment have been further enhanced with the opening of Terra Mítica near Benidorm, one of the most modern and attractive amusement parks in Europe.

The Costa Blanca is one of the most mountainous areas in Europe with some impressive peaks located on the edge of the coast. The map of the geography of the Costa Blanca shows the Piug Campana, a pyramid-shaped mountain that overlooks the city of Alfaz del Pi and reaches a height of 1,410 meters. You can also see on the map that the mountain range of the Sierra Bernia forms an impressive barrier that separates the Marina Alta from the Marina Baja and Calpe from Altea. The map shows that it reaches the height of 1,129 meters, and has been compared to the mountain range of black rock of the Isle of Skye, Scotland.

A good way to explore these mountains, if you are quite fit and have time, is to meet with a group of English people who organize different winter walks called Costa Blanca Mountain Walkers. Here you will enjoy a guided tour in good company through some wonderful mountainous landscapes. You do not need a map since the Costa Blanca Mountain Walkers group already knows the way. What if he does not feel fit or does not want to walk? Then a good option would be to go to a mountain town like Tarbena and enjoy the views while eating a traditional dish of Valencia, Calpe, Alicante or the specialties of Altea.

In the whole area you can see Arab castles. You can consult them on the geographical map of the Costa Blanca. The most famous is the fortress of Guadalest de Al Zaraq that belonged to Denia Taifate. From Calpe, the fastest way to get there is to take the motorway entrance before reaching Altea and exit just before the toll booths and enter Altea la Vieja – direction Callosa d’en Sarria, and then follow the signs. signs Guadalest is a rocky outcrop between the Sierra Aitana and the Sierra Serella from which you can see the wooded lake.

The national roads of the Costa Blanca started with the N332 that connected all the coastal cities. This road is still very useful and has been complemented by the A7 motorway (Autopista del Mediterráneo). You can see on the map that this highway will cross the Costa Blanca, through the section of Calpe-Benissa-Altea through the mountain chain of Bernia.

The A7 motorway is the fastest way to get around the Costa Blanca. The duration of Torrevieja to Alicante is 40 minutes and from Alicante to Benidorm 60 minutes. It does not appear on the map but this highway also connects to the Alicante airport, this allows you to leave Gatwick airpot, Arlanda airport, or Gardermoen airport in the morning and relax on the sunny terrace of your villa by noon.